Hello,
This will be almost certainly be the last post for the year. A few quick updates on what I've been up to:
If you are quick enough to see this, you will be able to listen to a recording I made for BBC Radio 4 of Eduardo Miranda's Symphony of Minds Listening preview, which was tracked in the main theatre of the Roland Levinsky Building in Plymouth with members of the Ten Tors Orchestra, conducted by Simon Ible. The full premiere is scheduled for next year's Peninsula Arts Contemporary Music Festival, in February 2013. The piece itself is very interesting, and involves using fMRI readings taken from different listeners to inform algorithmic and transformative compositional processes (I had a small hand in the development of the  software for the latter part of the process). There will hopefully be time to write a paper about the details at some point, but for now, if you are curious (and read this within 7 days of broadcast), check out BBC Radio 4's PM Programme, 1PM, 20th December 2012. Quick thanks to FX rentals for supplying the fistful of Neumann microphones I wanted for the session, too. FX always deliver on time and with no fuss, easily the best rental company I have ever dealt with. 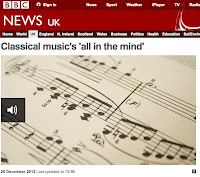 BBC News - Classical music's 'all in the mind' report
Also on the ICCMR front, I am also working on a very exciting new project with award-winning composer, Alexis Kirke: an algorithmic short film which will use biosensors to inform the narrative that Alexis has devised and directed. Film-Courage.com have carried out an interview with Alexis with his writer/director hat on, explaining some of the finer points, well worth a read! Also another preview interview with Alexis is available here. I'll post up more links to the publicity about the film as we get closer to the premiere date next year.
Finally work continues on the BCMI-MiDAS project, with the first set of experiments being run by our Reading partners, to be shortly followed by our own listening experiment now in the planning stages here in Plymouth.

Time to go and face the rain!
Thanks for stopping by and merry christmas all,
Duncan
Posted by DW at 12:23