Just a quick post to say that Geronimo! by Piney Gir is out on Monday on Damaged Goods Records and picking up great reviews, so I gather! I had a very minor role in its creation engineering some brass, BV's, and percussion in good company (the French Horn was expertly delivered by Tom Bennellick, who played on a little record called Sgt. Pepper's Lonely Hearts Club Band back in the '60s that you might have heard of!). 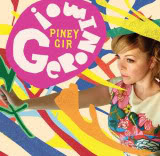 It's a wonderful album of beautifully crafted bouncy-folky stuff mostly tracked and self-produced in the Holywood Hills. Check it out!

I'm off to AES NYC this weekend so drop me a line if you are in the area. I'll try and do an update from there too as I know I've been a little slow on keeping this thing updated over the last month or two (I've been busy moving house - again!).