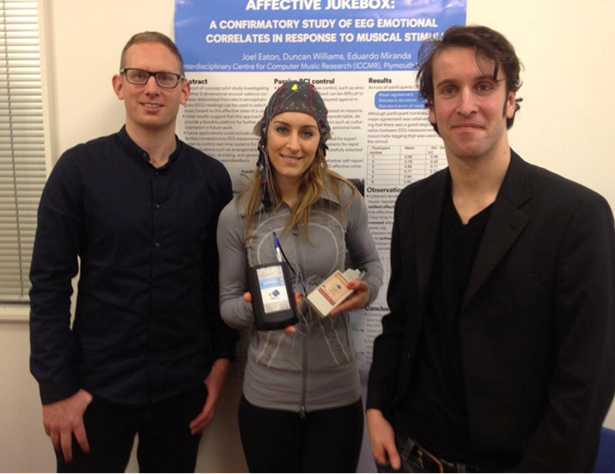 We were briefly featured on Channel 5's Gadgetshow this week, demonstrating our brain-computer interface for generating music using the EEG braincap to former Olympian turned TV presenter, Amy Williams (Joel, Amy, and myself on the right, in front of Joel's research poster about a brain-driven affective jukebox from the ICMC in Athens last year). You can view an excerpt from the show here.

As I mentioned in the previous entry, the Peninsula Arts Contemporary Music Festival also came around in the end of Feb, and has been picking up some very nice press, including this piece in the BBC Focus | Science and Technology magazine,


"The musical highlight for me, though, was Unfolding | Clusters, an audio-visual installation by Federico Visi, Duncan Williams and Giovanni Dothel. This piece explored amyotrophic lateral sclerosis (ALS), a devastating disorder – also known as motor neurone disease – in which degeneration of the motor neurones leads to progressive paralysis and ultimately death, usually within only three to five years. Data relating to the disease’s development was here converted into a pulsating soundtrack of multilayered electronica, with the piece becoming more disordered and dissonant as the nervous system gradually lost control over the muscles. It was an evocative representation of the disease, and a powerful way to get people talking about ALS, for which there’s still no cure."

Finally, this week sees the release of a new journal article regarding a sort-of-history of artificial intelligence and music creation, co-authored by myself and Eduardo Miranda, for Cambridge University Press' Organised Sound journal. The full details are on my publications page now.

As you can probably tell, things have been quite busy... more soon...!