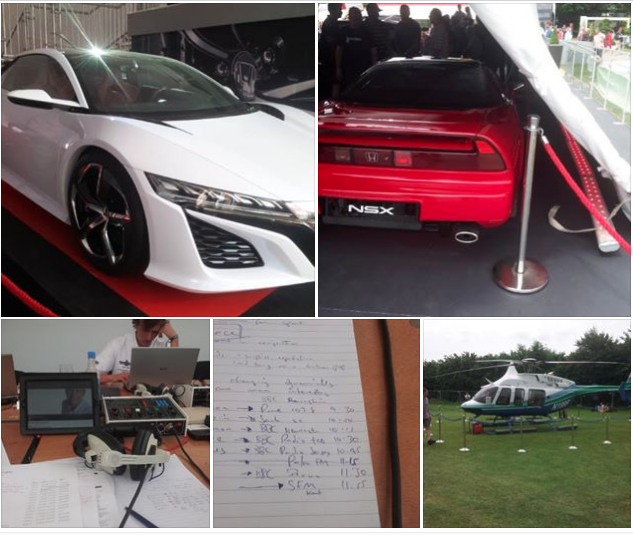 I'm back from a very hectic couple of weeks which included presentations at NIME and the BFE/AAWM conferences last week, and an enjoyable visit to Goodwood Festival of Speed as a psychoacoustic consultant for the new concept Honda NSX, which involved carrying out live broadcast interviews with several of the BBC stations (Devon, Newcastle, Lancs, Tees, Jersey), as well as a number of commercial stations including Kiss, Jack, SFM and Palm. Some interview material from the track was also filmed so if that crops up online I will try and post a link here.

Conference season isn't quite over yet. FedericoVisi and I will be at the SoniHed conference of health and environmental data in York this September, presenting an update on our work with the UCLA school of medicine on Motor Neurone Disease. Also in September I will be presenting two papers at this years joint ICMC/SMC conference, Evaluating Perceptual Separation in a Pilot System for Affective Composition (as part of the BCMI-MIdAS project), and Affective Jukebox: A confirmatory study of EEG emotional correlates in response to musical stimuli with my colleagues from the ICCMR in Athens.

Also as part of the BCMI-MIdAS project there are a number of forthcoming collaborative papers including work for the 6th International Brain-Computer Interface Conference 2014, in Graz, Austria and the 36th Annual International Conference of the IEEE Engineering in Medicine and Biology Society, in Chicago Illinois, both regarding tempo, brain-computer interfacing for tempo control and entrainment, coming up in August and September respectively. The relevant details are all live on the publications page now.

Thanks for stopping by,