Hello, time for a quick update I think.
I've just finished a recording at Worcester Chapel of a section of Robert Saxton and Arnold Wesker's Opera in two halves, Caritas, for performance later this year by OperaUpClose in Islington. Though recently re-released by NMC, the premier was released on disc by Collins Classics, though after a brief discussion about restoring the material from the masters, it ended up being a very enjoyable session with a mixed ensemble of choral and organ scholars leading the charge.

In other news I will be making a return visit to the US later this year, having been invited to give a guest lecture and accompanying seminar to Sound Recording Technology majors at the Stephen F. Austin State University of Texas as part of their Cole series of guest lectures in performing arts. I can't wait! I've also got some exciting academic news coming up, but more on that soon.

Keep an eye out for the new release by Oxford based Americana heroes, The Dreaming Spires, who release their debut album on Clubhouse this summer. It has already picked up a lot of heat on BBC6 and Time Out love it - I mixed the album with Sam Williams (legendary producer known for all of the big Supergrass tunes etc), and recorded a few of the tracks too. It's been mastered by Tim Turan and sounds great as well as having a superb package. Also on the music front, I'm pleased to say that one of our EMI/Juice productions has picked up a lot of plays on ITV (Wales!). I daren't (can't?!) name the show, though...! 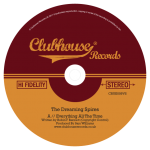 Still more to keep you posted on but that's about enough typing for the moment,
Bye for now,
Duncan

PS. Quick update on that: The first single from The Dreaming Spires' album is out on May 28th - a corker it is too, check out Not Every Song From the Sixties courtesy of NME here, or via the BBC iPlayer on Mark Radcliffe's BBC2 'Music Club' show where it has been picking up some pre-release airplay.
Posted by DW at 18:33